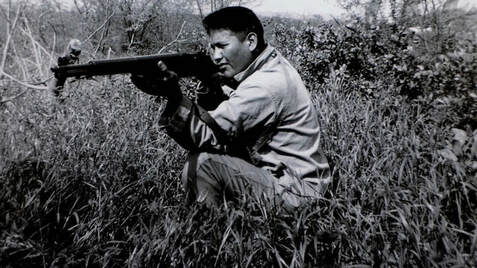 U.S. Marine Corps Chester Nez
Since proclaimed by Public Law 101-343 in 1990, November is observed as “Native American Heritage Month.”  During this month we take the opportunity to honor all Native Americans representing 574 federally recognized tribes and to acknowledge their ongoing contributions to the success and growth of our Nation.  The 2020 observance theme is:  “Many Nations, One Fight.”

The Navajo Code Talkers created an unbreakable code from their native language, which proved critical in combating the imperial Japanese forces during World War II.  Navajo Radio Operators (MOS 0642) newly graduated from Marine Corps boot camp developed the Code within seven weeks at Camp Elliot, California.  Private First Class Chester Nez served as one of these original Navajo Code Talkers from the invasion of Guadalcanal to the capture of the tunneled island of Peleliu.  On November 4, 1942, PFC Nez arrived in the Pacific Theater with twelve other Code Talkers to initially join General Vandergrift’s 1st Marine Division on Guadalcanal.  Because of the sensitive nature of the Code Talkers’ mission, not all enlisted personnel were aware of the existence of the Navajo Marines much less their operational role.  There were moments when service members became alarmed upon their hearing Navajo being spoken over communication lines or within their perimeter because they mistook the language for Japanese.  In late September 1944, in the midst of the campaign for Peleliu, PFC Nez and his partner, PFC Francis Tsinajnnie, were sent on a mission to support the Army’s 81st Division on the neighboring island of Anguar when they were captured and nearly executed by two U.S. soldiers who accused them of being Japanese soldiers impersonating Marines.  With a .45 pistol pointed at his temple, PFC Nez calmly insisted that the soldiers contact the Army’s communications center on Anguar to request an officer to verify their identities as American servicemen.  Fortunately, their identities were verified, and the two Code Talkers returned to their Marine unit on Peleliu.  Just before the battle for Iwo Jima, PFC Nez received orders to return to the United States having successfully fulfilled his duty.  The Code Talkers participated on every battlefield of the Pacific Theater and beyond, yet their contribution to victory remained classified until 1968.  Upon discharge, Chester Nez and the other Code Talkers were ordered not to reveal their role in the war to protect the Code for potential use in future military conflicts.  It was only after reading an article in a newspaper about the Code and its declassification that Chester Nez revealed to his family and his people that he was one of the original Navajo Code Talkers who created the unbreakable Code.
Newly Updated Navajo Code Talker Exhibit
Stop by our WWII Gallery to see our newly updated Navajo Code Talker exhibit!  This new addition includes interviews with Navajo Code Talkers, an explanation of the spoken code as well as the importance and deployment of the code, though some interactive functions may be temporarily disabled.  Within this exhibit are artifacts including a radio and headset used by Code Talkers,and one of the Congressional Gold Medals awarded to the Code Talkers.
On November 11, 2020, the National Museum of the American Indian on the National Mall in Washington, D.C. will unveil the National Native American Veterans Memorial designed by Marine Corps veteran Harvey Pratt (Cheyenne, Arapaho).  This outdoor memorial entitled, “Warriors’ Circle of Honor,” will provide a space for gathering and reflection as well as educate the visiting public about the myriad contributions that generations of American Indians, Alaska Natives, and Native Hawaiians have made to each branch of the U.S. Armed Services.