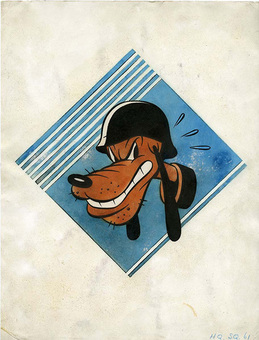 Walt Disney Studios, HQSQ-61, Ink & Watercolor, 14 x 10.5 in. From: National Museum of the Marine Corps, Triangle, Virginia. NMMC Accession Number 2014.96.28
As an intern at the National Museum of the Marine Corps during the spring of 2014, I discovered how to convince the curators to drop what they were doing and come and look at an artifact, or in my case, a group of artifacts. The day had started out normally enough: one of the Museum’s collections storage buildings was scheduled to receive some new storage shelves, which required an inventory and a temporary home for some items while the switch in storage units was made. Thoroughly prepared for a morning of moving photographs and maps, a volunteer and I began our work, moving methodically from bottom to top of the large flat file drawers. However, once we reached the top two drawers, well above my 5’4” height, we found something entirely different.

Tucked away in the very top of the flat files, we discovered a treasure trove of artwork. One after another, illustration board after illustration board came out, some with very familiar characters and bearing very recognizable artist signatures. Here, a black sheep and stars in casein paint; there, a screen print of Bugs Bunny, ready for a boxing match. Further on an unmistakable Walt Disney signature. I could tell this day was not going to be as routine as I had expected. Within the next 20 minutes, a large conference table was covered with artwork dating from World War II, and the Museum’s curators dropped what they were doing to take a look at the new discovery.

This day marked the beginning of an exciting project that lasted the entire summer. Nearly 150 pieces of original World War II-era artwork depicting Marine Corps aviation squadrons had been discovered, and the pieces needed to be researched, accessioned, cataloged, and scanned. Mediums varied from conté crayon and graphite to watercolors and gouache paint. The origin of the collection remains murky. There is no record of the artwork being donated or transferred to the Museum. However, it is clear that most of the works had been submitted for a National Geographic special edition magazine in 1944 that highlighted insignia artwork produced during the war years. Many bear a stamp dated 1944 that cleared them for publication, and a small paper taped on the back states that the artwork was sent to the magazine. These indicators helped to authenticate the pieces as originals

Additionally, a great deal of primary source information on these artifacts was available in the Museum’s research library. Original and carbon copies of memoranda and license agreements helped to map out the approval process to formally establish squadron insignia, and these original paintings were a crucial part of that process. In order to receive approval from the wartime Department of the Navy, certain criteria needed to be met in the form of “enclosures,” to include the original artwork, several photographs of the design, a detailed explanation of the colors used, and a discussion of the significance of the concept being depicted. A 1944 memo regarding squadron insignia requested, for example, “that a colored drawing of the insignia, approximately 11” x 14”, suitable for framing, and twelve 8” x 10” glossy photographic prints thereof, be forwarded to CNO [Chief of Naval Operations] for display and filing purposes. It is also requested that a brief outline of the significance of the motif accompany these prints.” Meanwhile, an Aviation Circular Letter from the CNO in 1944 outlined design standards by asserting that, “(1) The design shall be in keeping with the dignity of the service; (2) The motif shall have originality; (3) Significance shall portray generally the mission of the activity and be of such scope that the design is appropriate for succeeding activities of same mission.”
Companies like Walt Disney Productions contributed to the creation of Marine Corps insignia as well. By 1944 at least 80% of the Disney company’s work focused on assisting the war effort in lieu of its regular production activities. The studio designed around 1,200 insignia for everything from bombing squadrons to chaplain corps, incorporating favorite characters like Donald Duck, Goofy, and Dumbo. In some instances, the designs included new characters to add a personalized touch that represented the unit’s duties and location. The license agreements for insignia designs coming from Walt Disney Productions demonstrate Disney’s willingness to help with the war effort: the United States Government was granted “The exclusive and perpetual right and license to produce the designs...for and in consideration of the sum of One Dollar (1.00).”
Allison Ramsey was a Special Assistant at the National Museum of the Marine Corps. She graduated Cum Laude with a BA in History from American Military University and is currently enrolled in the Museum Studies Advanced Academic Program at Johns Hopkins University.