The Story of a WWII Identification Bracelet: Major L.D. Everton 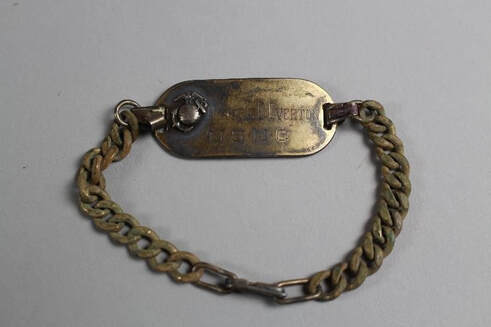 ​In Annandale, Virginia, during the early 1990s, Mrs. Ellen Littlefield was working in the rose garden of her home. Something unusual caught her eye while she was sifting through the soft soil. She was surprised to discover a slightly worn bracelet buried in the ground. Upon closer inspection, she noticed the front of the band had a small U.S. Marine Corps "Eagle, Globe, and Anchor" emblem. It was also engraved:

The underside of the bracelet was ornately inscribed: 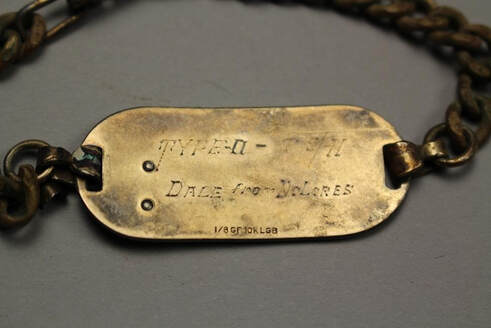 ​The bracelet obviously belonged to a Marine officer, but who was L. D. Everton?  When did he serve, and what did these markings mean?  Amazed by their discovery, Ellen and her husband, Dr. Keith Littlefield, attempted for years to identify the owner and locate surviving family members without success.

In the spring of 2014, the Littlefields attended an artifact roadshow hosted by the Stafford County (Virginia) Museum and Cultural Center. From ads in the paper, the couple learned that a military specialist from the National Museum of the Marine Corps was assisting at the event.  They hoped that the Marine Corps could help solve their mystery.  The Littlefields wondered if it was possible to discover who Major L. D. Everton was and if the Museum might be able to locate surviving members of the family. 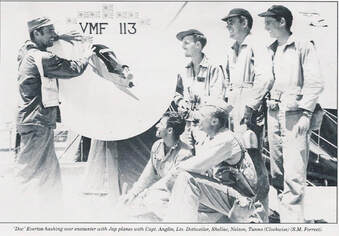 Major Everton would also receive the Distinguished Flying Cross for the same period.[7]  On 20 October 1942, however, his luck would run out.  During yet another chaotic air battle, “Doc” skillfully positioned his aircraft behind a fleeing Japanese fighter when another Zero suddenly ambushed him from the rear.  The Japanese fighter riddled his F4F-4 Wildcat with machine gun bullets and 20mm cannon fire.  The shells exploded in the cockpit, wounded Everton in the leg, and knocked him from the controls.  Everton later recounted that he let the aircraft spiral about 19,000 feet in an effort to “play dead” before recovering his aircraft to make an emergency forced landing.[8]

Everton was evacuated from the island shortly thereafter. He was awarded the Purple Heart, and, after recovering from his wounds, he became the Commanding Officer of VMF-113 in January 1943. “Doc” Everton then led the squadron in the assault on the Marshall Islands.[9]  There, he downed an additional two enemy fighters (with an additional probable kill).  With this accomplishment, Everton achieved the rare and notable status as a Marine “Double Ace,” officially credited with the destruction of 12 enemy aircraft during the war.[10]

Following World War II, Major Everton became the commanding officer of VMF-122 and led a jet fighter demonstration team similar to the U.S. Navy’s Blue Angels[11].  During the 1950s, he was promoted to colonel and served in a number of training commands and headquarters staffs, which included a lengthy period as the executive officer of the intelligence division, Headquarters Marine Corps, Washington, D.C., until 1958.  From 1962 to 1964, Col Everton was the commanding officer of Marine Barracks, Bremerton, Washington.[12] 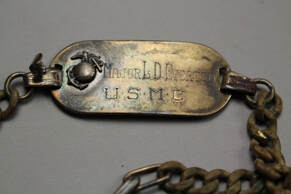 While the museum confirmed who “Doc” Everton was, how his bracelet came to be found in Annandale, Virginia, is still unknown.  Research of property records for Annandale do not indicate that the Evertons ever owned the home where his bracelet was discovered.  The house, built in 1948, was possibly rented to military and other Washington-based families during the late 1950s. This would match the approximate time in which Col Everton was assigned to Headquarters Marine Corps at the Pentagon in Northern Virginia.  It is also possible that he lived there during the mid-to-late-1960s, when Everton was  believed to have returned to the area as a civilian consultant to the Pentagon.

As an artifact, this World War II era identification bracelet is unique, both as a token of affection from Delores Everton to her husband  and as an important form of military personal identification. The engravings contain the same information typically seen on WWII-era U.S. Marine identification tags, with Everton’s blood type “O” marked prominently on the reverse.  Additionally, the aviator’s tetanus toxoid inoculation date, known as a “T-number,” is stamped in the form of T 9/41 (September 1941).  The bracelet is also manufacturer-marked LGB, representing the jewelry maker L.G. Balfour Company, a major supplier of wartime jewelry during the 1940s.

Identification bracelets such as this were popular items during the Second World War. Often presented to service members by loved ones, they also served a practical purpose, particularly in the Pacific theater.  When identification tags were first issued by the U.S. Marine Corps in 1917, they were secured to the wearer by necklaces of woven thin Monel wire, cloth tape, or even improvised bootlaces. These crude necklaces often failed in the harsh climates of the Pacific theater.  As a result, tags were often lost in training and combat.  When service members were able to obtain identification devices like Everton’s bracelet, they were ensured an added degree of protection if wounded or killed in action.  It was both a loving and practical gift.

Colonel Loren Dale “Doc” Everton retired from the United States Marine Corps on 39 June 1967. He was married to his wife, Delores Everton, for 48 years and passed away in February 1991. His identification bracelet was accepted into the permanent collection of the National Museum of the Marine Corps in September 2014.  Assigned the accession number 2014.XX.1, it was donated by Ellen Littlefield in memory of Colonel L. D. “Doc” Everton USMC (Ret.).