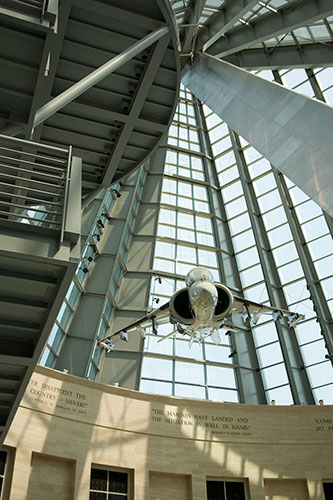 Semper Fidelis - Always Faithful - a phrase synonymous with U.S. Marines and their legendary contributions in every clime and place.    Here at the National Museum of the Marine Corps (NMMC) we’re faithful to preserving and telling the material history of this elite fighting force.

The Museum already tells more than 200 years of the Corps’ rich history, but we’re certainly not finished yet.  In cooperation with the Marine Corps Heritage Foundation, we have completed construction and design on an additional 115,000 square feet where we’ll tell more of this amazing story.  We’ve already opened the Marine Corps Combat Art Gallery, the Medal of Honor Theater and the Children’s Gallery.  Still to come are two historical galleries covering the Marine Corps from the mid-1970s to the present, Marine Corps sports gallery, and a Hall of Valor, as well as a changing exhibits area.  We’ll continue the use of life cast figures, artifacts, realistic environments, special lighting effects and state of the art audio/video media systems to bring the Marine story to life in this world-class Museum.

The entire build-out will take 5 years, with the new spaces opening in phases.  We’ll continue to offer activities and events throughout the years during the construction phase.   This Museum isn’t just a building full of inanimate objects, it’s a living, breathing place of discovery, healing, learning and growing.

I’m really excited that this final phase of the Museum will tell the entire Marine Corps story–from the warrior on the front lines to the families on the home front, the humanitarian efforts in desolate places to the devastation of inhuman actions, and triumph in the streets of battle to glory on the sports fields.

The only way to live up to “No better friend, no worse enemy” is to be sure there is no greater Museum than the National Museum of the Marine Corps.