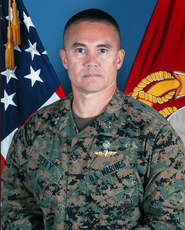 MajGen William H. Seely
Each May, our Nation takes the opportunity to reflect upon the past and ongoing contributions Asian Americans and Pacific Islanders (AAPI) bring to the success and growth of our Nation.  The origin of AAPI Heritage Month dates back to the 95th Congress (1977-1978) when five joint resolutions were introduced proposing that a week in May be designated to commemorate the accomplishments of the AAPI community.  On 23 October 1992, Congress passed Public Law 102-450 which permanently designated May of each year as “Asian/Pacific American Heritage Month.”  The 2021 observance theme is:  “Advancing Leaders.”

Major General William H. Seely III is the first Vietnamese-American general in the Marine Corps and currently our highest ranking general officer in service who is of Asian or Pacific Islander heritage.  MajGen Seely was born in Saigon, Vietnam and graduated from The Basic School in 1989.  He subsequently trained to become a Communications Officer and later, as a First Lieutenant, made a lateral move to the Intelligence Occupational Field.  MajGen Seely currently serves as the 35th Commandant of the Joint Forces Staff College at National Defense University, Washington, DC.